The changing face of the logistics sector

A combination of factors is driving increased interest in logistics real estate assets, including the continued growth of e-commerce and ongoing improvements to last-mile logistics, technology and the push towards automation.

Logistics is the part of supply chain management that plans, implements and controls the efficient forward and reverse flow and storage of goods and information between the point of origin and the point of consumption.

In conjunction with the cyclical drivers that have positioned the current logistics landscape, there are also structural drivers shaping the sector, such as more demanding consumers, the evolution of e-commerce in retail, urbanisation, robotics and global investment in logistics real estate assets.

Cloud’s the limit for e-commerce

Recent years have seen a surge in popularity for logistics assets. This is perhaps unsurprising, given that 2017 saw an estimated US$2.23 trillion in worldwide e-commerce sales, up from US$1.3 trillion just three years previously.

Consumer spending is increasing at its fastest rate since the GFC, providing a tailwind for overall growth, with the proportion of this expenditure accounted for by e-commerce increasing even faster. For the first time, last year e-commerce comprised more than 10% of global retail sales, with this figure set to grow to 17.5% by 2021 while total sales are forecast to exceed US$4.8 trillion.

The uptake of e-commerce varies by country. The UK is leading the way, as e-commerce accounts for 12% of retail sales. The US sits at 10%, but Australia lags with only about 7-8% of retail sales coming from e-commerce, perhaps showing the immediate opportunity ahead, and also the challenges faced by traditional retailers such as Myer and David Jones. Millennials will comprise 75% of the workforce by 2030. As such, their lifestyle patterns and demand for instant fulfilment will increasingly impact commercial real estate investment into the logistics sector. Broadly, customer expectations are increasing, with the focus now placed on goods arriving faster, more flexibly, and often with little to no delivery costs.

The shift towards urban logistics is therefore underpinned by greater supply chain management, facilitated by constantly evolving technology. While the need for buffer stock is less, e-commerce operators require an estimated three times more space than traditional warehouses, due to the greater diversity of products and the need to have them readily available.

Big data is also having an impact. Companies are analysing the vast, unstructured data sets produced by internet-connected devices to gain a greater understanding of who buys what, from where, and then how best to optimise route planning and minimise the cost of delivery.

These insights are ultimately useful for customer retention, as on-time delivery motivates 72% of consumers to make repeat purchases. Similarly, a significant proportion of online shoppers will abandon their purchases if shipping costs appear excessive. All of these considerations have implications for both the location and size of logistics assets.

The prospects of full automation are appealing. Where land can be expensive, autonomous warehouses that can utilise vertical space efficiently may be the future. However, as it stands, partial automation rules the sector, as occupiers consider operational flexibility and return on investment.

While the trend to acquire urban logistics real estate is in full swing, there is still a place for traditional logistics assets. Infrastructure investment has always been one of the primary contributors to growth and major road and transport investment continues to open up less accessible land and locations. This is evident through China’s Belt and Road Initiative (see breakout below).

Global real estate investment activity rose to US$953 billion in 2017, up slightly from US$941 billion in 2016, with economic conditions set to remain favourable through 2018. Logistics assets are the most popular amongst investors in 2018, with 36% of respondents across EMEA, the Americas and APAC scoring it as their most attractive sector in CBRE’s Investor Intentions Survey. This is up 4% on 2017. Technological, demographic and economic changes are nothing new. However, the logistics sector has never before experienced the structural shifts spurred on by the continued rise of e-commerce and automation, as well as the need for last-mile logistics. This has meant a blurring of the lines between logistics and retail, a transformation in worldwide supply chains, and has resulted in increasing levels of capital investment.

As of early 2017, the world’s largest online retailer, Amazon, employed 45,000 robots in 20 of its US distribution centres. Additionally, British online-only supermarket, Ocado, has recently opened a largely automated distribution facility that allows it to process 3.5 million items or roughly 65,000 orders each week.

Chinese e-commerce, retail and technology conglomerate, Alibaba, has committed to investing US$15 billion over the next five years to increase research and development in logistics data technology, as well as for the development of smart warehousing, smart delivery and global logistics infrastructure. Alibaba considers this core to building the global logistics network of the future.

Automation along the supply chain also extends outside of the warehouse. Route optimisation to better serve the last-mile logistics process have been in effect as far back as 2013, with UPS developing a predictive system called ORION to shorten routes for drivers, saving the company millions of dollars in fuel costs.

Driverless delivery vehicles may be the next wave of innovation. In late-2017, Tesla unveiled an autonomous truck, which can drive 800 kilometres on a single charge of its lithium-ion battery pack. On a smaller scale, earlier this year tech startup, Nuro, received US$92 million of funding to develop fully autonomous self-driving vehicles designed to bring items from local businesses directly to a customer’s home.

The Belt and Road Initiative (BRI) was launched by China in 2013 as a means of providing a platform for multilateral cooperation to create new trade routes, economic links and business networks.

The BRI will involve 65 countries with a total population of 4.4 billion and 30% share of the global economy. In comparative terms, the project is more than seven times the scale of the Marshall Plan to rebuild Europe after WWII.

The benefits of the BRI include filling infrastructure gaps in developing countries such as Pakistan and Afghanistan, who see it as a pathway from poverty. It is likely to accelerate economic growth in the countries involved, as well as China, as it increases trade and facilitates the transit of goods and international cooperation.

Michael Nijdam, Port of Rotterdam’s (the world’s busiest port) Corporate Strategist, said in an interview with IPE that freight trains already carry laptops and other higher-value products from China to Germany, travelling through Kazakhstan, Russia, Belarus and Poland in the process.

The trains currently haul about 80,000 twenty-foot equivalent unit (TEU) containers a year, with this expected to rise to 300,000 TEUs a year.

Transporting goods between China and Germany via train takes approximately 16 days, which is less than half of the 36 days required for maritime freight.

Nijdam says there will be increased cargo movement from China to production centres in Eastern Europe, to Western Europe, then to the UK, and beyond to the US. “We are already working on improving rail links from the Port of Rotterdam, back to Southern Germany, Hungary, the Czech Republic and Poland,” said Mr Nidjam. 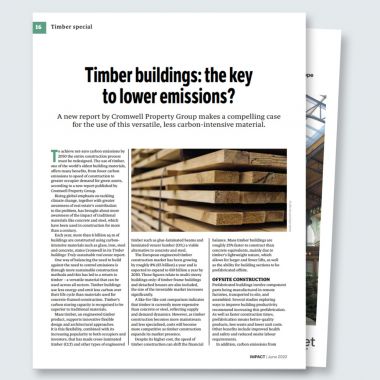