The relative fragility of the global supply chain has been revealed through a ‘perfect storm’ of events ranging from the culmination of COVID-19-induced lockdowns, significant shifts to the patterns of demand, labour shortages, and extreme weather.

The jig is up

Over the course of the last two years, COVID-19 restrictions have hit the global economy in a number of ways. The start of the pandemic saw a supply shock as activity was deliberately brought to a halt in an effort to stop the spread of the virus. As restrictions were lifted, production was unable to kick off as quickly as it had initially shut down.

China was the first country to shut down as a result of the pandemic in early-2020, and while the manufacturing powerhouse ground to a halt, the rest of the world carried on, thereby causing an imbalance between supply and demand.

In Australia, many organisations reported weeks-long delivery delays. According to the ACCC, only 10% of container ships arrived in their designated berth windows in 2020 and 2021, the lowest rate on record.

As it became increasingly apparent lockdowns would be more prolonged than initially hoped, consumer spending was reallocated across sectors, shifting towards goods and away from contact-intense services. This has seen bottlenecks in some places and spare capacity elsewhere. People who transitioned to a remote working environment, for example, spent big on office equipment for their home, while non-discretionary spending such as travel took a major hit.

Despite experiencing the impact of supply chain disruptions, comparatively, Australia has been spared the worst. Supply chain bottlenecks have been milder in Australia and neighbouring Asia compared to the United States, who have borne the brunt of the supply chain issues.

The last 12 months, in particular, have been tough for global supply chains. In March 2021, the Ever Given, a 400-metre, 200,000-tonne container ship ran aground in Egypt’s Suez Canal, which provides the crucial trade link from Asia to Europe (responsible for 12% of global trade), in a catastrophe that was seemingly symbolic of the state of the global shipping industry. It took six days to free the ship, with estimates the blockage delayed $10 billion worth of goods every day and held up hundreds of ships over this same time period.

The butterfly effect of supply chains

Lockdowns, labour shortages and strains on logistics networks have all resulted in unprecedented rises in shipping costs. However, there are signs the worst has now passed, and the recovery is underway. While global shipping costs remain at all-time highs, they have begun to plateau and are anticipated to begin receding. This, however, will take time, and is likely to mean supply disruptions will not be fully resolved until the back end of 2022.

It is not simply the imbalance between supply and demand that is causing these issues, there are numerous additional contributing factors. Here, we look at the ports of Los Angeles and Long Beach to explain the complex ecosystem at play. 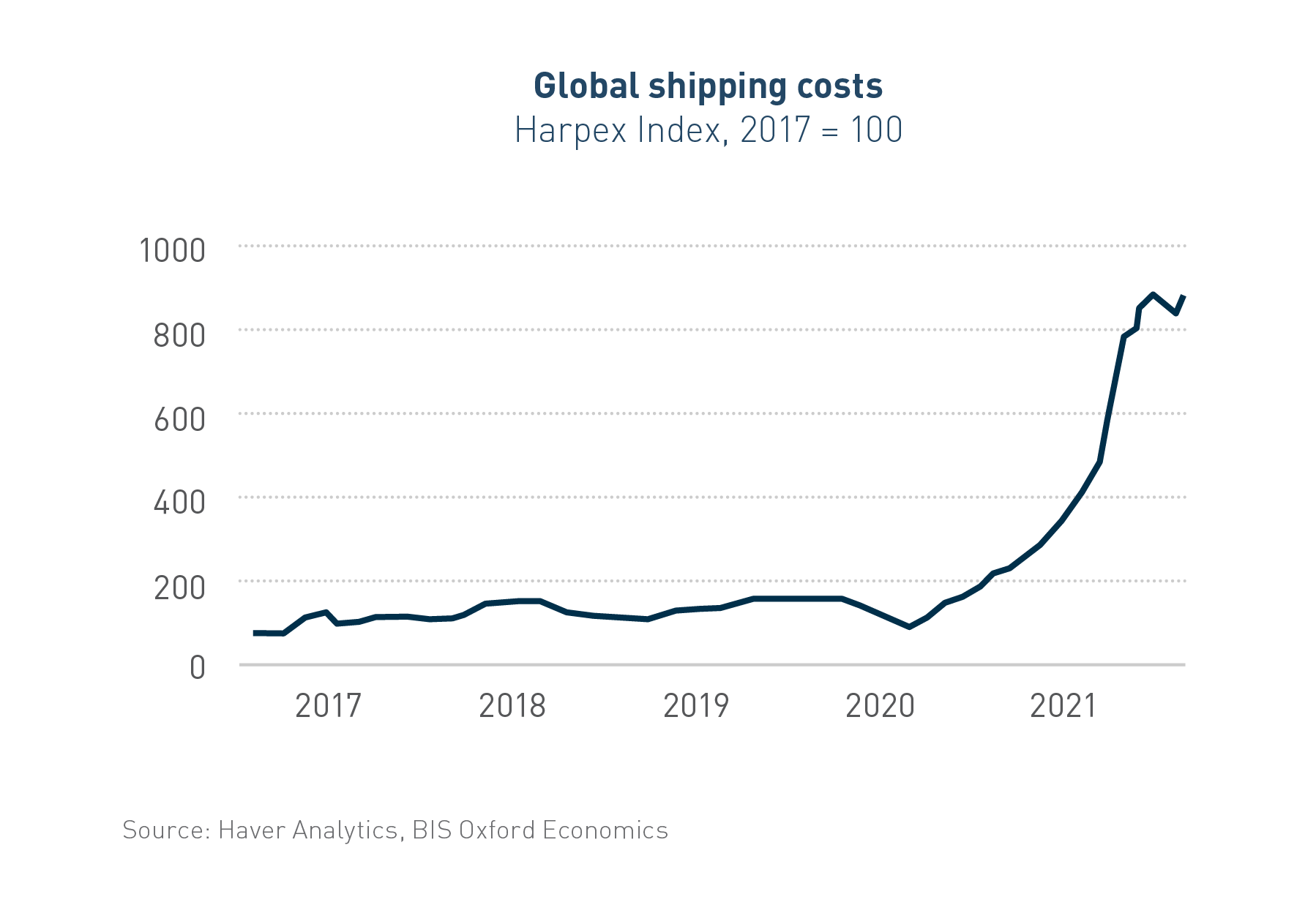 Southern Californian ports are some of the busiest in the world, accounting for 40% of all container traffic entering the United States.

In early-February 2022, the ports of Los Angeles and Long Beach had 78 container ships queueing at sea to offload goods, down from the January peak of 109. Although ship congestion is easing, it remains severe by historical standards. Prior to the pandemic, it was unusual for ships to wait to unload goods at the port of Los Angeles. Now, container ships are waiting an average of 18 days.

But it’s not just shipping which is disrupting supply chains. Labour shortages due to lockdowns, sickness, huge stimulus, and resilient economic activity has seen some of the lowest paid finally get a ‘pay rise’.

A massive shortage of workers on wharves and associated land-based transport had ships unable to offload containers. As a result, fresh goods spoiled, exacerbating supply and price issues.

The American Trucking Association estimates that a shortage of 61,500 truck drivers has swelled 30% to 80,000 since the beginning of the pandemic.

In mid-October 2021, despite the truck driver shortage, US President Joe Biden announced the Port of Los Angeles would begin operating 24/7. However, an estimated 30% of times available to pick up freight at the port continues to go unused.

Exacerbating capacity concerns further is the impact the Omicron variant has had on dockworkers. Throughout January 2022, approximately 1,700 dockworkers at West Coast ports tested positive for COVID-19, with 80% of these infections from the ports of Los Angeles and Long Beach. This compares to 1,624 infections across the entirety of 2021.

Even without these aforementioned concerns, the sheer volume of shipping containers arriving are causing problems of their own. A twenty-foot equivalent unit (TEU) is the standard size of a shipping container (although forty-foot equivalent units are also common). At its January 2022 peak, there were over 700,000 TEU’s waiting on ships offshore of Los Angeles and Long Beach.

While this number has reduced, there are currently hundreds of thousands of TEU’s on ships waiting to dock. They cannot be unloaded until what has already been unloaded is picked up and taken away by an empty truck. A truck would normally bring back an empty container and take on a full one, but when a storage yard is full of containers, there is nowhere to store empty ones.

Effectively, to move 700,000 full containers, there would need to be space for 700,000 empty ones.  As it stands, for every available truck, there are 18 containers waiting to be removed from the ports of Los Angeles and Long Beach.

What are the broader implications?

At its simplest, if demand outstrips supply for food, fuel, a car, a trade or a service, you can expect prices to rise for that good or service. The growth in prices from one period to another is inflation. Given the scenario outlined above, it’s easy to see how prices for goods and services have moved.

Sectors that have been hit the hardest by bottlenecks have seen the greatest inflationary pressures. This has been most evident and instant in the export of goods. Labour supply has been a slower burn as latent capacity is absorbed, but we are now starting to see wages increase. The net effect, though, has seen annual headline inflation in the US hit 40-year highs of 7.5%.

Similar to the global supply chain issues, Australia has been affected to a lesser extent. This is due, in part, to our lesser reliance on global trade to supply key commodities. In fact, we tend to export most of these, but have a heavier reliance on partially or fully manufactured goods. Headline inflation now sits at 3.5%, with underlying inflation at 2.6%. This is forecast to continue to rise to 3.25% over the next few quarters and expected to decline to 2.75% in 2023 as supply-side problems are resolved and consumption patterns normalise.

However, the persistence of these supply chain disruptions and the resulting effects on prices will continue to cast uncertainty on these forecasts. Policymakers will keep a close eye on this situation, because if inflation is baked in and likely to keep growing, there will need to be policy adjustments and a rise of interest rates. While this may sound bad, at this stage, the level of inflation is not deemed significant and the economy can withstand it.