Brisbane's 2032 Olympic bid: Why it's bigger than sport

In a late-February decision endorsed unanimously by the International Olympic Committee’s (IOC) executive board, the IOC Future Host Summer Commission designated Brisbane as the preferred candidate city to host the 2032 Summer Olympic Games. The decision to formally award Brisbane the Games was announced in July 2021.

The Olympic Games have been known for making or breaking a host city long after the closing ceremony. As such, now that Brisbane is officially looking ahead to 2032, it is walking a fine line between holding a successful event and not being left with expensive and unused infrastructure once the Games are over.

The good, the bad and the ‘New Norm’

Cathy Freeman pulling away from the competition down the stretch to win 400-metre gold in front of 112,000 people on ‘Magic Monday’ at Stadium Australia remains one of Australia’s greatest ever sporting moments.

Days earlier at the Sydney International Aquatic Centre, a 17-year-old Ian Thorpe mowed down Gary Hall Jr (who had earlier said his team would smash the Australians like guitars) in the final leg of the men’s 4x100m freestyle relay to set a new world record and hand the US team their first ever loss in the event.

Less than a decade prior to Sydney Olympic Park playing host to some of Australian sport’s most iconic moments, the site was a toxic waste dump. The NSW Government spent more than $130 million to remediate the pollution that was spread across the 400-hectare site, and it is not out of the realm of possibility to think the site would still be a toxic waste dump had Sydney’s Olympic bid been unsuccessful.

This logic can similarly be applied to Stadium Australia, a $690 million multipurpose stadium constructed between September 1996 and March 1999, as well as the Sydney Superdome, Sydney Showground and athletic, aquatic, tennis and hockey centres. However, unlike stadiums from the Athens and Rio de Janeiro Games, long-term planning means the Sydney venues are still in regular use and surrounded by a mixed-use commercial and residential precinct, as well as one of Australia’s largest metropolitan parklands.

The idea of an ‘Olympic curse’ has gained traction due to many host nations facing budget blowouts and little long-term benefit to the economy or locals. Athens and Rio de Janeiro, in particular, serve as recent cautionary tales to potential host cities that ill-conceived planning can be hideously expensive and severely detrimental in the long term. The birthplace of the Olympics, Greece won the race to host the 2004 Games without worrying too much about its weakening economy being able to handle the cost. Hosting the event cost approximately €13.6 billion (A$20.5 billion), making it the most expensive Olympics ever at the time.

Within days of the closing ceremony, Greece warned its public debt and deficit figures would be worse than anticipated. The 2004 deficit came in at 6.1% of GDP, which was more than double the permissible Eurozone limit, while debt reached 110.6% of GDP, the highest in the European Union.

A new airport, transport infrastructure, telecommunications network and power stations built in the lead up to the Games have improved quality of life, however the huge debt and abandoned purpose-built venues stand in contrast to this and are more a testament to the overall lack of forward-planning.

In 2018, the IOC responded to the clear risks a host city takes on by introducing the ‘New Norm’. The New Norm outlines 118 reforms that hosts from 2024 onwards will adhere to in order to increase flexibility and efficiency.

Key takeaways include the relaxation of a previously long-held IOC stipulation that each sport needed its own venue and will now allow temporary venues. This will immediately reduce the need for new, Olympic-specific infrastructure, as well as the risk of buildings sitting abandoned after the Games, as seen in Athens.

The New Norm means the direct cost of hosting an Olympic Games has significantly reduced, which is greatly beneficial to Brisbane.

How can Brisbane benefit?

Hosting a mega-event like the Olympic Games can be a catalyst to fast-track many improvements to public infrastructure such as transport, roads and services, that may otherwise have taken decades to deliver, or not have happened at all. An argument can be made that this is the case for Sydney’s Olympic Park.

In the short term, there will be a huge spike in tourism to South East Queensland. In London, more than 800,000 international visitors attended an event during the 2012 Olympics, delivering a boost of just under £600 million outside of ticket sales.

There are also numerous intangible benefits for the residents of a host city, including increased civic pride and social cohesion, as well as community health and wellbeing benefits.

Queensland Premier Annastacia Palaszczuk has flagged that a 50,000-seat stadium may be built to host the opening and closing ceremonies, as well as track and field events. However, an alternative is to use one of two existing stadiums in South East Queensland.

A new aquatics facility with a 15,000-person capacity has also been proposed to host swimming and water polo. Both facilities are already included as part of Queensland’s five to ten-year plan.

In terms of infrastructure that positions Brisbane as a new world city, there are a number of projects which have recently completed, are underway, or are earmarked that will shape the region in the lead up to 2032.

The IOC awarding Brisbane the Olympics represents a generational opportunity to further facilitate the provision of infrastructure and attract global capital. Hosting the Olympics, if done correctly, can be a catalyst for improving South East Queensland’s connectivity, liveability and prosperity over the long term, as well as showcasing the region to the world and inspiring confidence in the private sector to invest alongside government. The success of the IOC’s New Norm will be gauged in Paris in 2024 and Los Angeles in 2028. The XXXIII and XXXIV Olympiads will no doubt form a blueprint for how Brisbane can successfully host the Olympics. Regardless, the Olympic Games provide South East Queensland with an opportunity to showcase the region to the world and invest in infrastructure that will position Brisbane as a new world city over the long term. 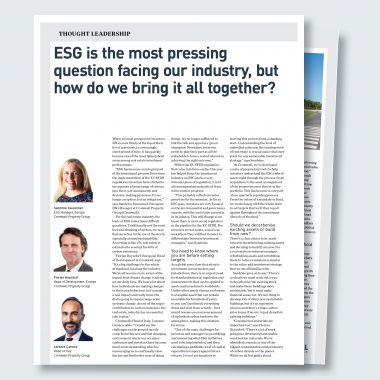